A throwback from the 90s, Baker-Tech's original header.

2013 Reader's Choice Award BEST COMPUTER STORE by the readers of the Selma Enterprise and Kingsburg Recorder. 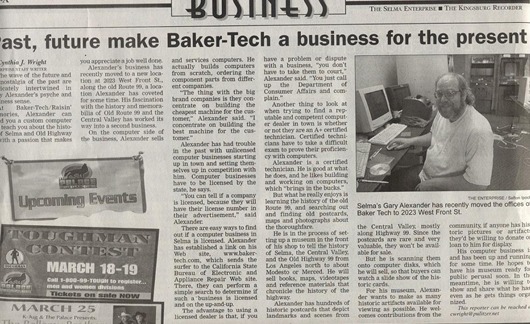 You can add HTML directly into this element to render on the page.

Just edit this element to add your own HTML.

South Valley Computers was originally established as Baker-Tech Computers in 1995. Head-tech and owner, Gary Alexander, was even in the Selma Enterprise in 2004 highlighting his business. When the company expanded to include a second location in 2009, the name was changed to South Valley Computers. Although much has changed in 20 years, the standards of SVC has not.

We have always promised fast and reliable service. We truly have a desire to help and a passion for technology. If your computer is running slow, has a virus, is running out of hard drive space or needs an upgrade (or maybe all the above) we can, and want to, help! Whether it's your personal computer or for a business we understand that your computer is an integral part of your life!

Our custom built systems are made with your needs in mind (including budget constraints) and we make sure to use non-proprietary parts ensuring the quickest build, greatest ability for future upgrades/expansions as new products are released and quickest repairs should anything ever go wrong. This certainly doesn't mean your computer is made of cheap junk; we use well known brand name components like Microsoft, Intel, AMD, ASUS, ATI and Western Digital.

This little guy has been running since 1996! The original logo created by Dan Hazlett